Pigs raised by farmers are seen at Linquan county on December 5, 2018 in Fuyang, Anhui Province of China.

BEIJING — China needs more pork imports than ever as the country grapples with an outbreak of a swine disease — and that could become a business opportunity for U.S. farmers if the two countries can reach an agreement on trade.

African swine fever hit Chinese pig farms last year, causing a severe shortage in the meat that is a staple for hundreds of millions of Chinese households.

At the same time, one of the U.S. demands in ongoing trade negotiations is that China purchases billions of dollars’ worth of American farm products. At the conclusion of the latest round of trade talks last week, U.S. President Donald Trump said China agreed to a “very substantial phase one deal” that includes purchases of about $40 billion to $50 billion American agricultural products. Beijing has yet to publicly confirm the figure.

China to buy US farm products

The phased aspect of the deal is encouraging to the Chinese side, said He Weiwen, executive council member of the China Association of International Trade, which comes under the leadership of the Ministry of Commerce.

According to a CNBC translation of his Mandarin-language remarks, He said the Chinese will show their sincerity by increasing purchases of American agricultural products.

However, there’s a catch. It’s become increasingly clear that Beijing would like to push the U.S. to remove the tariffs it’s applied on billions of dollars’ worth of Chinese goods.

“If China has promised to buy agricultural products, but the U.S. only delays the additional tariffs instead of lifting them, then it doesn’t make much sense to China,“ He said. “This is the crucial point.”

On Thursday, China’s Ministry of Commerce spokesperson Gao Feng emphasized that Beijing would like the U.S. to cancel all additional tariffs in order to reach a final deal on trade. Gao noted that Chinese companies are increasing their purchases of American agricultural products according to market needs and market-based principles, and that the two trade delegations remain in communication with hope of reaching a phased agreement as soon as possible.

“I think there will be talk for more pork purchase,” He said earlier in the week, noting he does not speak on behalf of the Chinese government. “China’s soybean shortage is not that big. China can cope with it by adjusting feed formula.”

Soybeans are used as animal feed in China and a shrinking pig herd is dampening demand for the oilseed.

China’s import of US pork

U.S. pork accounted for about 14% of Chinese imports of the meat in 2017, about the same as the year before, according to CNBC analysis of Chinese customs data complied by BRIC Agri-Info Group.

That proportion dropped to 8% in 2018 as trade tensions escalated, falling as low as 2% in the fourth quarter of last year, the analysis showed. As of May 2019, the data showed U.S. pork recovered a market share of about 8%, still far short of pre-trade war levels.

US market share of China pork imports, % by year 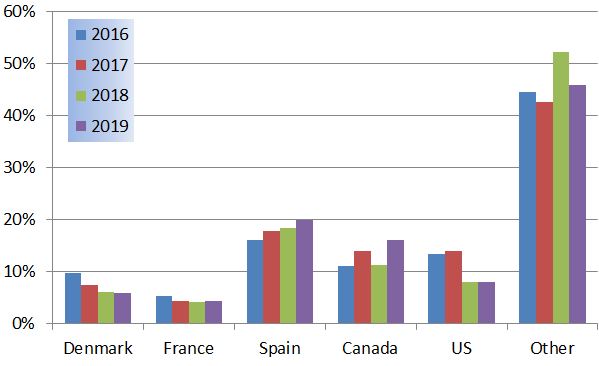 That gap potentially creates an opportunity for American farmers, such as those from the nation’s largest pork producing state of Iowa.

China’s pork shortage will likely persist for at least a few months, if not longer. On Thursday, China’s Ministry of Agriculture and Rural Affairs said that it expected pork prices to remain at a high level through the New Year holiday and China’s Spring Festival in late January 2020, according to a press conference transcript from financial database Wind Info.

Authorities have also released pork from national reserves in an effort to ease the shortage.

Chris Rogers, research analyst at supply chain data company Panjiva, also pointed out that Chinese imports of U.S. agricultural goods covered by retaliatory duties climbed 317% year-on-year to $8.3 billion in August. “(The rise) suggests Chinese purchases are already being increased aggressively even before the new deal has been signed,” Rogers said.

However, it’s not a given that China’s increased need for pork will result in more purchases from the U.S.

“China will import from all its trade suppliers, including the U.S., but the American price has to be competitive as well,” He said. “There have been cases where the transaction price did not have market competitiveness and the company had to drop the purchase.”

Chinese pork producers such as Muyuan have also seen their share prices soar as traders bet on greater profits.