XIAOSHAN AIRPORT, HANGZHOU, ZHEJIANG PROVINCE, CHINA: An outbound tourist group is waiting for check-in in front of the counter of China Customs. Chinese nationals have become the largest number of foreign tourists visiting other countries in 2015 as the number of outbound visitors crossed 120 million, registering an 11 million increase from last year.

BEIJING — The rapid growth of Chinese tourism took a bit of a breather during the latest week-long National Day holiday, government data indicate.

The seven-day vacation from Oct. 1 to Oct. 7 is dubbed “Golden Week” and is one of the few major government-mandated holidays in a country where personal vacation days are few. This year’s National Day was particularly significant domestically since it revolved around massive celebrations on Oct. 1 for the 70th anniversary of the Communist Party’s rule.

Chinese tourist sites received 782 million visits during the holiday, up well over 7% from last year’s 726 million, according to the Ministry of Culture and Tourism. But, that’s slower than reported growth of more than 9% in 2018, and down from a 10% increase in 2017.

Retail and food and beverage sales from Oct. 1 to Oct. 7 grew 8.5% to 1.52 trillion yuan ($212.7 billion), according to the Ministry of Commerce. While a solid figure, that’s a slower pace than the Commerce Ministry’s claims of nearly 10% or higher growth for previous years. 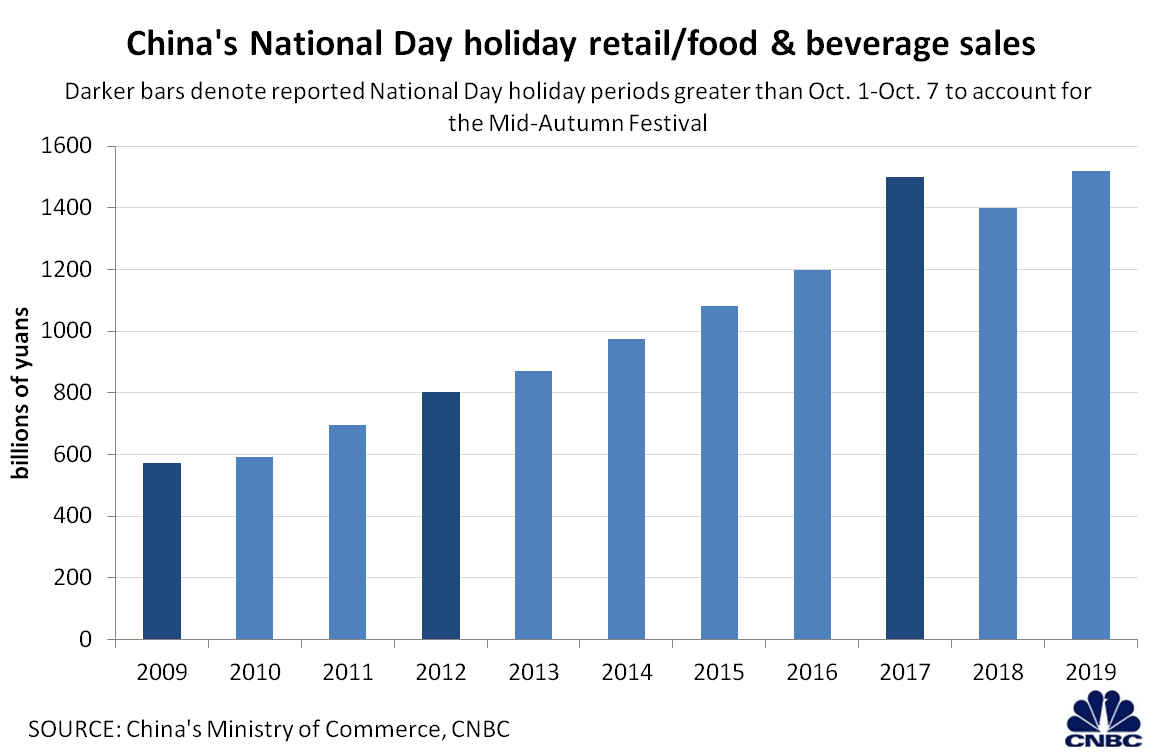 “Golden Week data point to a slowdown,” Ting Lu, Nomura’s chief China economist, said in the title of a report distributed Wednesday. “As China’s economy has become increasingly reliant on consumption to drive its growth, data from ‘golden weeks’ have become a good barometer of China’s consumption growth trend.”

Chinese authorities are trying to boost domestic consumption in an effort to support economic growth. Shortly after a major government meeting in March, authorities announced the May 1 Labor Day holiday would be extended by two days by swapping those working days with weekends, as is typical in China.

Tourism growth slowed during another golden week this year, the Lunar New Year holiday in February. Official numbers for overseas travel during that period were not clear about the actual rate of change.

On the other hand, the National Immigration Administration said in an online post Monday that for the first six days of the holiday, the border entries and exits of mainland Chinese residents dropped 15.1% from a year ago to 6.07 million.

Even considering the Hong Kong government’s report of a 50% drop in tourist visitors amid local unrest, overall entries and exits tracked by China’s immigration administration fell 11% to 10.45 million.

But in the first half of the year, Chinese outbound travel did increase 14% to 81.29 million trips, according to figures from the China Tourism Academy.

When contacted by CNBC, the Ministry of Culture and Tourism would not explain the discrepancy and stood by its publicly released data. The National Immigration Administration did not respond to a faxed request for comment.

“Overseas tourism, the booming consumption market are more rational,” the culture and tourism ministry said in a section header in its report on Golden Week travel this year. That’s according to a CNBC translation of the Chinese-language text.

The ministry’s report added that compared with previous years, Chinese traveling overseas sought relaxation more than shopping, and booking volume increased by more than double digits for lesser-known destinations such as Croatia and Slovakia.

Regardless, the Chinese that did venture overseas last week spent more than they did last year using mobile payment app Alipay. The company, which is run by Alibaba-affiliate Ant Financial, said average total spend per user increased 15% to about 2,500 ($350).

Chinese tourists to Japan, the most popular destination for individual travel on the Ctrip booking platform, increased by 30% with an average spend of 6,879 yuan, according to the company. Ctrip noted in a report that popular culture and easier visa policies helped spur the increase in travel, which is rare for such a mature destination like Japan.

Domestically, the top 10 cities whose residents spent the most on National Day travel within China spent at least 3,000 yuan, with Shenzhen topping the list at 3,324 yuan, according to Ctrip.

Not all travel during the holiday required major expenditure, either. Beijing News reported that the star-shaped Beijing Daxing International Airport, which opened a few days before the holiday, received about 90,000 visits a day on Oct. 2, 3 and 4, while a daily average of 4,852 passengers left the transit hub.