Johnson’s baby powder on a supermarket shelf in Alhambra, California.

The unofficial start to earnings season is off to a bullish beginning with companies like UnitedHealth, Johnson & Johnson, and J.P. Morgan Chase all blowing past analysts’ expectations, easing concerns that the China-U.S. trade battle would derail the economy.

Of the 11 S&P 500 companies that reported earnings before the bell on Tuesday, only two missed Wall Street’s estimates. 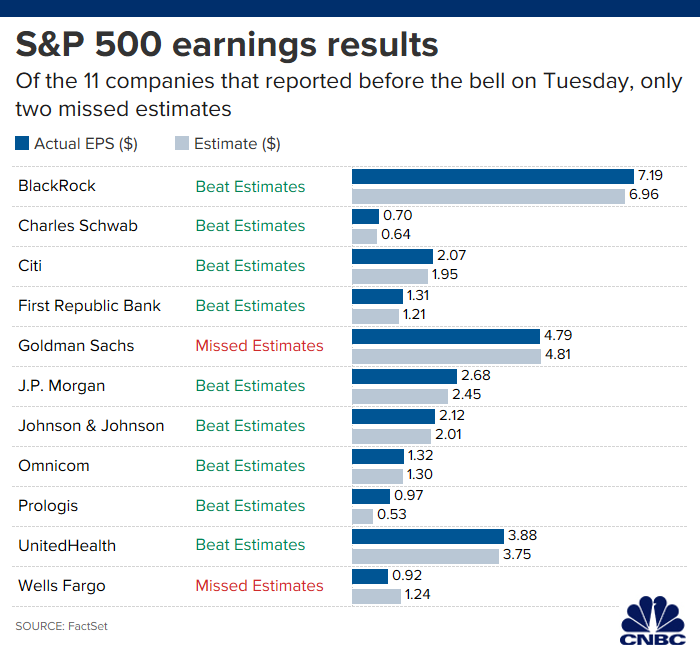 “Ahead of each earnings season in 2019 the consensus estimates were calling for negative earnings growth but as companies report we see results coming in better-than-feared,” said Nick Raich, chief executive officer of The Earnings Scouting Report.

Earnings for the S&P 500 are expected to decline by 4.6% this quarter, after growing by more than 3% in the second quarter, according to FactSet. This trend has not played out so far this season. Including those that reported this morning, 34 S&P 500 companies have reported third-quarter results and 26 of 34 companies have reported positive EPS growth, according to The Earnings Scouting Report.

On the downside, major U.S. bank Goldman Sachs reported a rare miss in profits. Investment banking produced $1.69 billion in revenue, below the $1.72 billion estimate. Wells Fargo was the only other company to miss on earnings, as the embattled company navigates its restructuring operations. But Wells Fargo traded higher 3% as investors seemed to welcome the bank’s new chief Charles Scharf set to begin his role next week.

“There’s definitely a slowdown” but it’s not as bad as feared, said Raich.

When all 500 companies eventually report, Raich expects flat to upward earnings growth for the quarter.

“That better-than-feared trend is persisting in the early reporters and that will persist the remainder of earnings season,” said Raich.

J.B. Hunt and United Airlines are set to report after the bell on Tuesday.