We’ve been here before – several times, and not long ago.

A plodding but steady rally is drawing the S&P 500 toward a new record high as investors lean on modest interest rates and firm credit conditions to support the market as corporate profits flatten out. Near the crest of a rally, a Federal Reserve policy meeting awaits.

This captures the current market field position, with the S&P 500 just a hair below a record high after a nearly 7% rebound from its August low as a Fed decision awaits on Wednesday. It also describes the setup ahead of each of the last five Fed meetings dating back to March.

Within days of each of those prior meetings, the S&P 500 entered a pullback of between 2% and 7% over the subsequent weeks. The most severe of those drops, at more than 6% each, came after the May 1 and July 31 meetings, which like the upcoming meeting were about halfway through an earnings-reporting season in which investors were placated by better-than-feared results. 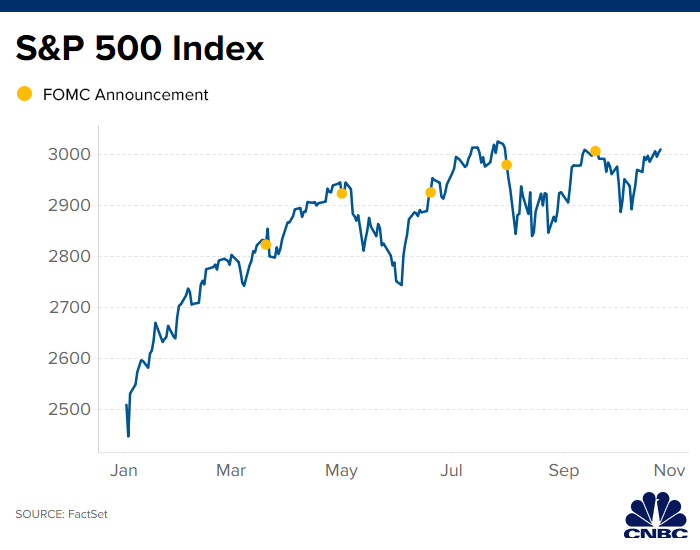 The retreats in stocks coinciding with earlier Fed meetings were not particularly violent or long-lasting. And they were not hostile reactions to any Fed surprise: The decision in each case was as anticipated, with more dovish language leading to quarter-point rate cuts both in July and September. Another quarter-point cut is generally expected for next week as well, though beyond that the outlook is less clear.

It seems the Fed news this year simply concentrated attention on what has been an uncomfortable perceived trade-off between economic growth and easier Fed policy, with significant concern in past months that the central bank was at risk of acting too slowly or ineffectively to support the economy given the unpredictable pressure of a trade-war being felt.

After each Fed meeting this year, too, the 10-year Treasury yield declined, at least initially, which has served as a restraint on equities. Stock investors have preferred higher yields as a sign the economy is holding up well and risk appetites are recovering.

The 10-year Treasury has moved up appreciably from its August and early-October lows near 1.5%, settling Friday at 1.80%. This has rebuilt a positive spread between long- and short-term Treasuries, undoing the inverted yield curve which crystallized the intense recession fears of late summer.

With this as the backdrop, are stocks again at risk of rolling over as eyes turn to Fed Chairman Jerome Powell Wednesday afternoon?

Nearly anything can serve as an excuse for stocks to back off after a good run, of course, and this includes an unsurprising decision from the Fed. And perhaps if Powell signals that the Fed will go on hold for a while after this meeting, it might cause a flutter through stock and bond portfolios.

But there are a few reasons to think the market right now isn’t especially vulnerable this time to a rude awakening or lasting retrenchment coinciding with the Fed meeting.

For one thing, stocks have advanced over the past two months without rising expectations for incremental Fed easing and without an outsized reliance on defensive “bond substitute stocks.”

In recent weeks, stocks more geared to a reaccelerating global economy — financials, industrials, materials, small-caps, semiconductors — have been outperforming those “all-weather” growth and staples stocks. This suggests the market is watching that leading indicators of industrial activity curling higher and betting the expansion has legs.

In fact, the global lift in bond yields — in the case of Europe, their move to “less negative” readings below zero — has been accompanied by an emerging belief that central banks may have approached a logical endpoint, for now, in their campaigns to stoke growth with ever-easier policies. With Christine Lagarde taking over as European Central Bank president, the talk has been about her perceived ability to marshal support for greater fiscal stimulus.

Henry McVey, global macro strategist at KKR, says, “We now believe that we are reaching a tipping point where lower rates are no longer good for valuations, which represents an important shift in investor psychology.”

This psychological shift in U.S. markets can perhaps be seen through investors’ evolving view on the idea that the Fed’s rate cuts have been a “mid-cycle adjustment” — similar to those in the mid- and late-1990s — and not an urgent, long-lasting easing cycle to rescue the economy. When Powell characterized the Fed’s effort this way earlier this year, markets threw a tantrum, viewing it as insufficiently dovish.

Now this is something close to the comfortable consensus view. The fact that the Treasury yield curve from five to 30-year maturities is so steep — running from 1.60% to 2.26% — hints that this scenario is broadly priced into markets.

The credit markets likewise continue to show firm risk appetites and modest risk of an imminent economic downturn. While the most speculative-grade junk bonds rated CCC or worse have struggled and price in greater default risk, the bulk of the corporate-debt market is strong.

Brian Reynolds of Reynolds Strategy points out that Netflix this week first sought to sell 10-year debt at 5.125%. Yet “demand was so rabid that it actually priced at just 4.875%. That is a super-sized move, indicative of how aggressive credit investors have become. Netflix is junk rated, has new competition, and has burned more cash this year than WeWork. Yet, it was able to issue debt at less than 5%.”

Aside from the budding rotation toward more cyclical stocks and steady credit conditions, the market has also exhibited strong breadth, with the running tally of rising and falling stocks reaching a fresh all-time high.

This is generally viewed as a sign of a well-supported, healthy rally. And, of course, seasonal tendencies have turned positive for the bulls, with November and December showing a strong historical upside bias.

Is all this enough to help the market avoid a Fed meeting scare this Halloween week?