Investors lately have been heeding that classic bit of advice for writers: “Kill your darlings.”

Rather than a writer deleting his most cherished but overwrought passages, investors are ditching some of the most hyped, unproven and aggressively priced growth stocks with ambitions of outmaneuvering the giants of consumer technology.

While the S&P 500 churned to a new record high for the week, a broad sampling of name-brand e-commerce upstarts had their shares shredded.

In the past week alone, food-delivery portal GrubHub, online furniture seller Wayfair, Internet marketplace Etsy and social-media scrapbook site Pinterest have reported earnings not terribly far from forecasts. But the market took no mercy, leaving those four stocks down between 20% and 40% in the last week. 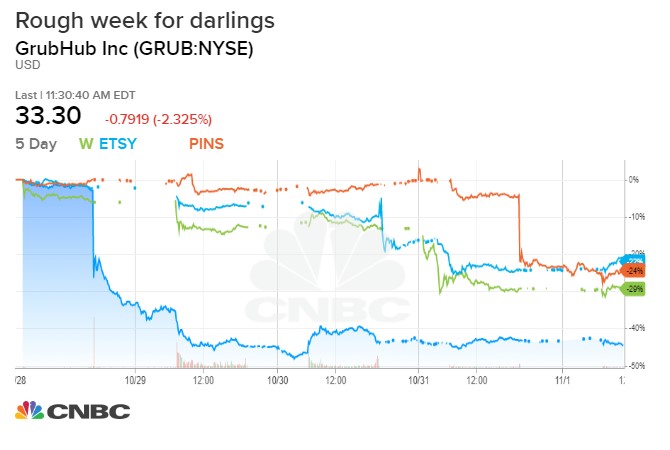 While each attacking different markets, these companies are all deploying software to deliver real-world goods (in Pinterest’s case leads and ads for real-world product sales).

They all lack the massive scale or customer loyalty of Amazon, eBay or Facebook. And they each embody the private-startup mentality of growing revenue and customer relationships as fast as possible, while touting a huge “addressable market” to attack — without a clear path toward sustainable profitability.

What’s hurting these high-concept, high-valuation tech phenoms is not the global-slowdown and trade-friction themes that pressured the broad market in late summer.

It is a stark reassessment of businesses that purport to be software companies and aspire to software valuations, but don’t enjoy the lush margins and effortless economies of scale that software can achieve. Because they are doing the hard stuff: coordinating meal deliveries, shipping couches across the country, for example.

David Sacks, co-founder of Craft Ventures and a former PayPal COO, notes in a recent Medium post, “When you’re losing money on every transaction, you can’t make it up in volume. In fact, the more revenue that a businesses with negative unit economics generates, the more money it loses… There is now a painful readjustment happening as many of these companies try to fix unit economics and bring their cost structures in line.”

Though he was discussing private startups, the same reckoning is bleeding into public markets. This is largely thanks to the IPOs of Uber and Lyft, which sagged immediately; the direct listing of Slack, which has slumped 40% since its July debut; and the disastrous failed attempt by WeWork to raise capital from public investors.

If WeWork stands as the logical extreme of over-capitalized startups with upside-down economics and reckless governance, its comeuppance appears to have raised suspicion over valuations of aggressive entrants into traditional industries generally.

And so the abandonment of upstart emerging-growth “disrupters” by investors goes beyond consumer Internet contenders, though.

Beyond Meat, the buzzy maker of synthetic meat substitutes going after the entire protein market, has seen its stock disgorge more than half of its furious early surge in the months after it’s May initial offering. The stock’s decline accelerated last week even after reporting a small profit as insiders were allowed to sell shares following the IPO “lockup” expiration. Beyond Meat was down more than 40% in October alone.

And the entire class of smaller software-as-a-service stocks — which soared to towering valuations as if all were destined to become the next Salesforce.com — have been cut down hard. The Global X Cloud Computing ETF (CLOU) has dropped 12% in three months even as incumbents Microsoft and Alphabet sit near record highs, for instance.

What, then, does this mean for the broad stock market, which is trudging along thanks to a plausible trough in earnings last quarter, a dose of Federal Reserve easing, low bond yields and inklings of a global-growth upturn?

As Wayfair and GrubHub were tanking last month, shares of General Electric were improving persuasively off a low base and some of the best performers in the S&P 500 included Apple, Charter Communications, truck-maker Paccar and legacy-tech stalwart Hewlett-Packard Enterprise.

Which is to say it remains a discerning, uneven market. The equal-weighted version of the S&P 500 has trended lower over the past year versus the standard market-cap-weighted index – a sign the “average stock” is fading relative to the mega-caps.

Jeff deGraaf of Renaissance Macro Research says, this pattern “is not necessarily bearish. All it tells us is that there’s an advantage to large cap versus small cap names versus the average name in the index, but making a bearish market call because of it is at best a premature indicator.”

The clinging by investors to bigger companies fits with the broad view of a fairly late-cycle phase of the bull market, though we’ve seen signs of economically sensitive groups gaining traction as perhaps the economy emerges from a soft patch. The trend also speaks to the winner-take-most nature of this tech-enabled economy.

Before this year, the oncoming rush of unicorn IPOs was viewed as having two-sided risk. On one hand, a breathless and heedless stampeding into these brand-name startups might have generated a speculative froth and overconfidence in easy money – as in the later 1990s.

On the other side was a sense that rejection of this class of unicorns by public investors would mark a peak in risk appetites and undercut the valuation of the listed tech sector.

So far, the market seems to be navigating a middle way between these hazards: Buying some of these IPOs, but insisting on discounts. Testing the upstart Internet concepts with harsher business-model scrutiny, and selling them summarily when they come up short.

In the writing craft, “killing one’s darlings” is meant to produce cleaner, less-indulgent copy. Perhaps, if investors are lucky, doing something similar with the most convoluted and incoherent business models can produce for the market a more streamlined, rational story.