(This story is part of the Weekend Brief edition of the Evening Brief newsletter. To sign up for CNBC’s Evening Brief, .)

Being a contrarian can make someone seem like a genius or idiotic. For Nick Schommer, it has been the former this year.

Schommer manages the Janus Henderson Contrarian I (JCONX) fund, which has nearly $3 billion in assets and has been on fire in 2019. The fund is up nearly 37% year to date and ranks in the top percentile among its peers, Morningstar data shows. It’s performance outpaces the U.S. Fund Mid-Cap Blend category average by more than 15 percentage points.

This staggering outperformance is a byproduct of large bets on stocks such as Crown Holdings, a company that makes aluminum cans. Schommer also added Disney to the portfolio when the stock was trading near its 2019 lows. He also has positions other strong performers such as Liberty Media Formula One and PagSeguro Digital, a Brazilian payments company.

“We’re looking to invest in durable businesses which are trading at a significant discount to what we think their fair value is,” said Schommer. “We want that intrinsic value as a business to grow over time and we want management teams that are aligned with us as shareholders.” 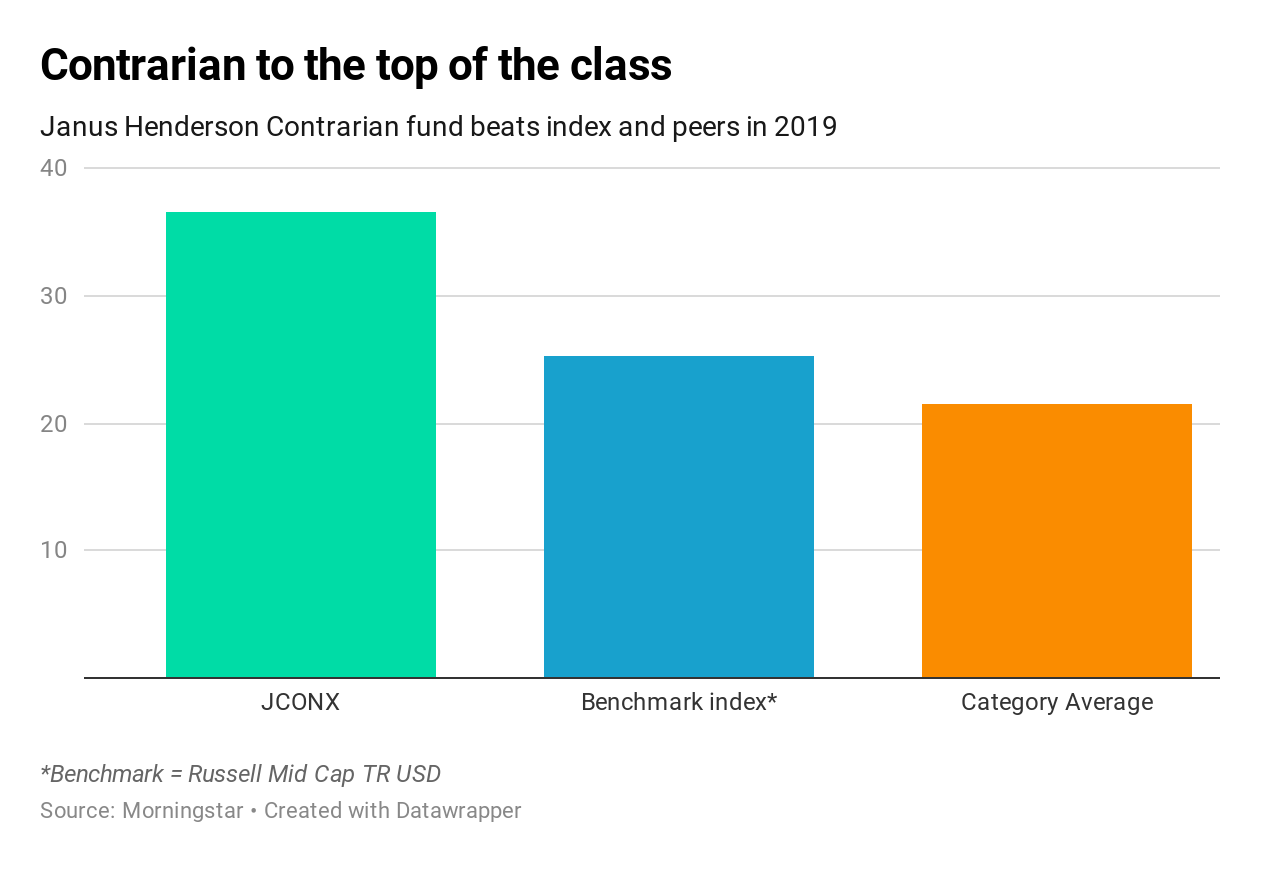 Schommer says he tries to find companies with “misunderstood business models” to invest in, noting that nearly half of the portfolio is made up of such companies. “In these scenarios, it’s execution by management teams that’s the key to value creation,” he said.

A prime example of such a company is Crown Holdings. Schommer argues what was misunderstood about the company is the impact that increased awareness around the use of plastic goods would have on Crown’s product demand. He said that as companies and brands move away from plastic packaging, it has increased growth for the aluminum cans industry to the mid-single digits from a range of zero to 2% annually.

Crown Holdings shares have been on fire this year, rallying more than 78%. The stock is also on pace for its biggest annual gain since 2002, when it skyrocketed more than 200%. Crown was added to the fund on Dec. 31, 2018, when it wrapped up a 26.1% annual decline.

Schommer made another contrarian bet earlier this year that has panned out well: Disney. The position, which makes up nearly 3% of the overall portfolio, was first added late March, when the stock was trading near its 2019 lows. Since then, the stock is up about 33% and recently hit an all-time high.

“This is a great example of what we try to own,” Schommer said. “Today, it’s not a contrarian play, but if we wound the clock back to nine months ago, the market perception was quite different.”

He pointed out Disney shares had been underperforming for five years before they popped as investors grew wary of ESPN’s subscriber losses and disruption around the cable bundle by video streamers such as Netflix.

All of that changed in April when Disney unveiled its video-streaming platform Disney+, which got more than 10 million sign-ups after launching on Tuesday. Disney also completed earlier this year its acquisition of Fox’s entertainment assets.

Other successful contrarian buys by Schommer include Liberty Media Formula One and PagSeguro. Formula One shares ripped 37% higher this year after sliding 9.2% in 2018. PagSeguro, which went public in January 2018, has nearly doubled in value this year. 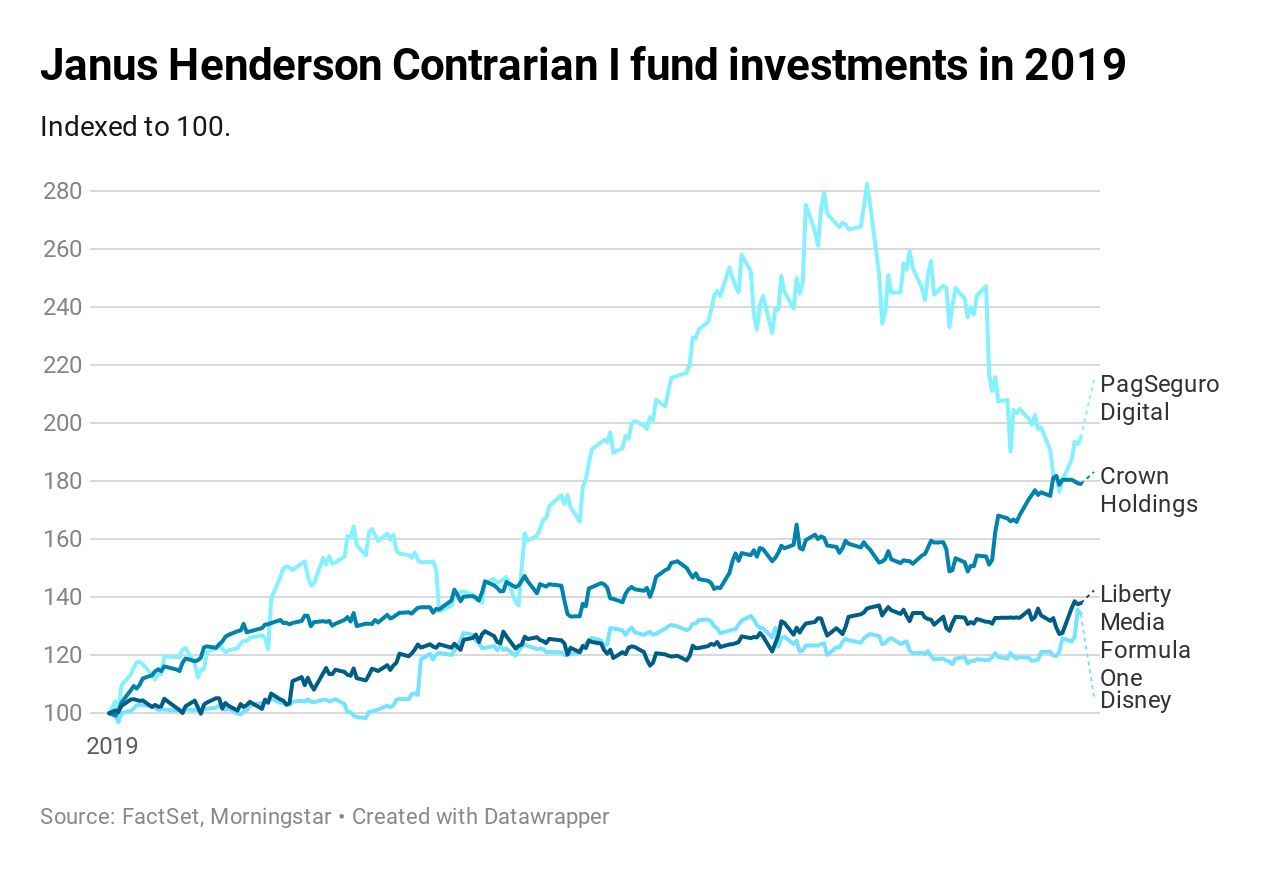 “Because the core of the portfolio focuses on these misunderstood business models, they’re very idiosyncratic ideas and it’s also where execution drives performance, so we’re not dependent on the macro to drive performance,” he said.

TD Ameritrade is one investment that has not panned out for Schommer thus far. The stock, which is the fund’s second-largest holding behind Crown, is down more than 17% since it was bought in late September 2017. This year the stock has been under pressure since the company eliminated its trading fees for clients.

But Schommer is still optimistic on the stock, saying TD Ameritrade’s biggest risk “has now been removed.”

Schommer took over management of the fund in July 2017. While this year’s performance is impressive, his strategy is susceptible to sharp pullbacks given some of the risks he takes in his investments, said Morningstar analyst Connor Young.

Young also pointed out the market’s run-up this year “does play in the fund’s favor” despite its contrarian bent.

The S&P 500 is up more than 20% in 2019 after dropping 6% last year amid a massive sell-off in the fourth quarter. A reversal in U.S. monetary policy by the Federal Reserve, coupled with improving tone around U.S.-China trade relations, has lifted the broader market to record levels this year.

The Fed has cut rates three times this year. In 2018, the central bank hiked rates four times, with the last one contributing to the market’s sell-off to end the year. On trade, China and the U.S. agreed last month to a phase one deal which is expected to be signed sometime in November.

Schommer thinks the market will grind higher in 2020 as investors deal with “volatility and the macro events and geopolitics.”