Wonder where your paycheck is going? You might want to look into your monthly subscriptions.

Subscription services are on the rise — and taking up a significant chunk of people’s paychecks. These seemingly small monthly charges are adding up as people pay per month instead of owning an asset outright. Analysts and financial planners say the popular revenue model could result in more personal debt and weigh on people’s ability to save.

Zach Perret, CEO of fintech company Plaid, said U.S. income is increasingly “encumbered” with recurring payments. He pointed to a few reasons: young people are renting things like cars and furniture instead of owning, installment payments for expensive items like a Peloton bike are more widely available, and subscription services are booming.

“What that leaves us with is a lot of income that is spoken for in a person’s paycheck,” Perret told CNBC in a phone interview. “The percentage of free cash flow, or unencumbered income, is a lot lower now than we might have seen in the past.”

Subscriptions are becoming a popular way to buy things online, or stream media. Forty six percent of consumers in a recent McKinsey survey subscribe to an online streaming service like Netflix. But consumer goods, or so-called boxes, are also on the rise. E-commerce subscription market has grown by more than 100 percent per year over the past five years, according to the consulting firm. The target audience for these tech offers tends to be “younger urbanites,” according to McKinsey. 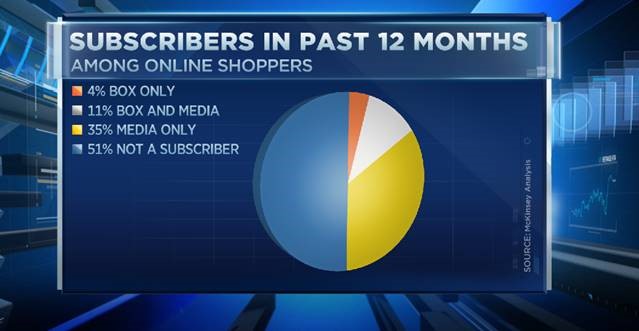 A $4 or $8 subscription for streaming or makeup might not sound high — but it adds up and might result in “accumulating consumer debt,” according to Chantel Bonneau, a financial advisor for Northwestern Mutual. Bonneau said it comes down behavioral economics.

“What it leads to is that people aren’t saving as much,” Bonneau said. “People don’t have that same mentality that you need to subscribe to savings.”

She also pointed to Instagram targeting, and use of data. Subscription services seem to find a way onto consumers’ social media feeds, prompting them to buy things they might not otherwise. Those recurring payments are easy to forget about since they’re on “auto pilot,” she said. 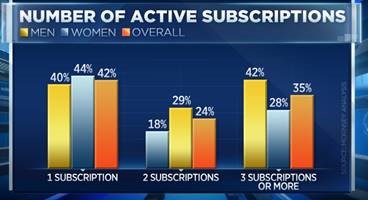 People are also way off when it comes to estimating monthly spending on these services, according to a report from Waterstone Management Group. Eighty four percent of Americans underestimated the recurring monthly expenses. On average, people said that they spent $79.74 a month. But that total increased 40% to $111.61 when they were asked to consider specific names such as Spotify, Netflix, and Dollar Shave Club.

The subscribers are simultaneously dealing with debt burdens. Excluding mortgages, U.S. adults over the age of 18 have an average $29,800 in personal debt, according to the latest findings from Northwestern Mutual’s 2019 Planning & Progress Study. Among the generations, Gen X reported the highest levels of personal debt with $36,000 on average. They’re followed by Baby Boomers at $28,600 and millennials at $27,900 on average. More than one-third of people’s monthly income is already going toward paying off debt, the study found.

The revenue model is working well for the tech companies themselves, and isn’t likely to reverse. The model has also resulted in some high-profile deals. Unilever bought Dollar Shave Club for $1 billion in 2016, and grocery chain Albertsons bought meal-kit company Plated for $200 million.

Gene Munster of Loup Ventures said about half of the 800 early stage companies his firm looks at each year have subscription revenue models.

“Most of the large tech and media companies now have at least a portion of their revenue from subscription,” he said.

Munster said the model caught on after Salesforce went public in 2004 and Netflix became a household name. There was a flurry of software IPOs, followed by companies like Microsoft, Adobe and Autodesk shifting to a subscription model. In the past five years, Munster said most tech companies are turning towards a “mobile first subscription business.”

“Recurring revenue is nectar for investors given it provides predictability,” he said. “This is evidenced by the higher earnings multiples investors reward these subscription business.”