US President Donald Trump speaks after announcing and initial deal with China while meeting the special Envoy and Vice Premier of the People’s Republic of China Liu He at the Oval Office of the White House in Washington, DC on October 11, 2019.

President Donald Trump said Friday the Federal Reserve should still lower interest rates even though China and the U.S. agreed to the first part of a trade deal.

“The Federal Reserve should cut rates regardless of how good this is,” Trump said in the Oval Office. “We have a great economy, but we have a Federal Reserve that’s not in step with the rest of the world.”

“I think they ought to get in step,” he said.

The U.S. central bank has already cut rates twice this year in part because of weakness in the global economy, which has arisen due to the ongoing trade war. On Friday, however, the two sides announced strides to end the trade war.

Trump announced the first phase of a trade deal that will bring Chinese agricultural purchases to a range of $40 billion to $50 billion. That phase also includes agreements by both nations on intellectual property, Trump said, as well as accords on foreign exchange issues. In exchange, the U.S. agreed to hold off on tariff increases scheduled for next week. Trump also said that phase two of the deal will come soon after the terms of the first one is signed. 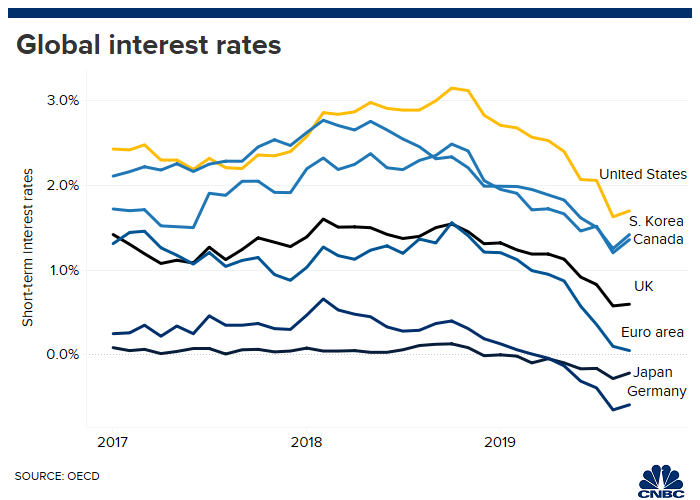 The Fed is scheduled to meet at the end of the month, with investors largely expecting a rate cut. Market expectations for lower interest rates by the end of October were at 74.3%, according to the CME Group’s FedWatch tool.

U.S. economic growth has been slowing this year with many economists citing the trade war with China. The Fed expects GDP for 2019 to come in at 2.2%, down from 2.9% in 2018. The Fed had said that growth could be worse if the trade war continued.